I got this from Philosophics Blog who was commenting on my series of post. 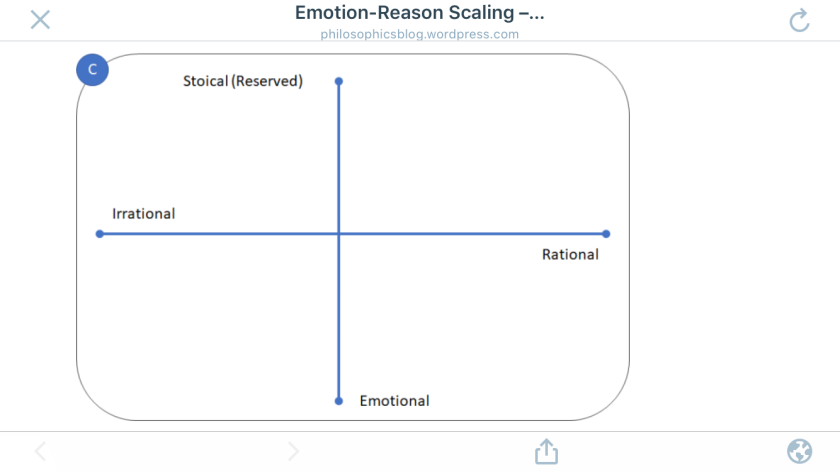 lets see if i can get to my point of all this.

In Parts 1 and 2 I posed an exercise of monitoring and then graphing ones emotional intensity over a period of time. Then I pondered if it would be possible to develop a similarly construed graph of Reason intensity. I received a number of comments from friends and readers about this. And the issue was all the same: How could we graph an intensity of Reason ? Some asked or attempted to grapple with such a monitoring and scaling and others wanted a definition or are trying to find a definition by which we could then appraise Reason graphically.

I was not trying to trick anyone. I honestly was wondering what people thought about it. It just crossed my mind that we so easily could make a chart of emotional intensity over time regardless of what the emotion was — could we do the same with reason?

I guess the answer is apparently not.

The graph above I think came close to what I was formulating in my mind about how, if I could rate an intensity of Reason, how emotion might relate to it.

I was also thinking quite similar to:

However, I think my original idea behind this series was more about how inseparable Reason and Emotion is; less polemical and more correspondent.

The reason I was asking folks to think of charting emotional intensity was for a setting up of a different model for how Reason and emotion relate, one where Reason is not a mitigating or taming aspect of emotion but rather the converse.

So let’s use the hypothetical graph.

As an instructional analogy, I suggest that Reason is that part of human consciousness which is the graphed line, and emotion the space below the line. Instead of taming or stifling or controlling emotion, Reason rides the line of emotional intensity usually exhibiting an unaware and incognizant state of awareness–while regularly dismissive –of its emotional affect: The thing we usually understand as Reason is when consciousness is not acknowledging the emotional state involved with its operating, which is to say, Reason is seen, viewed or understood as by definition not being influenced by emotion — or at least this is a common idealized goal for “being reasonable”. This seems to be such an ideal mandate that where we might conflate Reason declares Reason as a flat exemption from emotion such that “what is able to see truth” has been compromised and thus develops a compensation for its (reason’s) own lack called irrationality, say, and as though Reason has stepped out of the picture in the being able to identify the irrational and the rational state.

{I advise one take counsel from the non-philosophical idea of unilateral duality, which I have talked about often in my posts recent and long past.}

Reason thus may identify a particular manner by which consciousness establishes the human being in the world as indeed an object which has only reasonable connections with the universe. And this is to say, the polemic such as the figures above could represent what is able to arise once Reason is picked out, so to speak, to distinguish the human being as special and self-evidently separate from the universe, that is, except along those specific junctures that reason dictates or reflexively understands of itself or allows for such an understanding, those junctures by which the human being may or is permitted to know of her interaction with the operating universe. Such Reasonable manner can be said to be inherently disembodied knowledge.

This could explain why so many people, perhaps especially in the West, have a low “emotional intelligence”, difficulty understanding emotional connection, as well as how emotion can be involved in how one is able to perceive (know) the world. As well, my explanation could make a contribution to explaining why the modern human being is involved with a world which seems to be responding negatively to human activity despite our best intentions: Becuase our reasonable intentions are necessarily disembodied, the knowledge which is produced through such a naive reasonable state is necessarily maladaptive to the problems it perceives; in other words, the problem itself is already formulated in a mistaken manner of coming upon the true universe.

Ok. Let’s munch on those cookies for a second.