Two ground breaking philosophical books would be an excellent present for your curious minded philosopher !

The descriptions of the books online are not very good, so here are some better descriptions:

“Non-philosophy and Philosophy” is a short essay that speaks to the simplicity of the philosophical underpinnings of a few big-names in Western philosophy. It suggests that authors are not so much arguing various points as they are indicating a particular experience that I call ‘the philosophical revolution’. 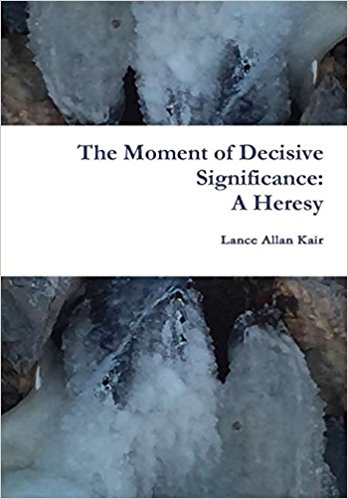 “The Moment of Decisive Significance” is an alternative journey through the Gospels.

What the Introduction calls an ‘object oriented’ reading of the Gospels beckons to Graham Harman’s Object Oriented Ontology or Object Oriented Philosophy but is more an indicator of a difference in approach, what one could call a non-conventional or un-traditional approach.

Bringing in authors from Kierkegaard to Harman, Kant to Laruelle, Feuerbach to Zizek, Plato to Badiou, the use of philosophical discussion is not viscous. This book goes straight through the story in the Gospels explaining and detailing how the pieces and events of the Gospels can adhere in a manner that appear cogent and sensible apart from the explanation that relies upon a theological Oneness. And yet, the book is not an argument against religion; it suggests that there are ‘two routes’ upon objects that do not reduce to anihilate each other, even if one of those routes always works toward annihilation.

This essay is not saying very much about religious belief or an ability to have faith; rather, it suggests that Jesus is speaking to a small minority of people who are having a particular experience of world. By this revelation, it suggests that the Gospels, and indeed the Bible, is saying something much larger and much more significant than another proposal about God; The Story of Jesus exemplifies and reveals how the human being functions by giving us a view into not only the variety of experience that consciousness allows for, but actually into a particular mythological moment that is kept shrouded by the idea of religion, indeed beyond esotericism, albeit, for the purposes of having a particular kind of world. It is thereby a discussion about what philosophy and religion do, and as well an exploration of consciousness itself.

The book is written for the layman and scholar alike.

I hope these less haughty descriptions will entice your curiosity.

that which connects us

In Search of The Soul

Monthly Festival : Turn your book into a movie and get it seen by 1000s of people. Or garner FULL FEEDBACK from publishers on your novel and help your next draft. Or get a transcript video of your novel performed by professional actors.